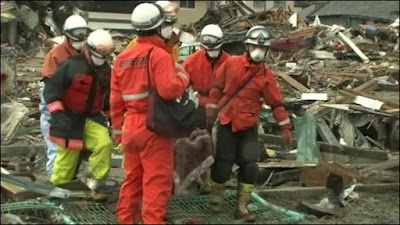 I am addicted to following coverage of the devastation in Japan. Maybe it’s simply the overwhelming magnitude of annihilation. It’s difficult not to be curious and saying it’s surreal is an understatement. Today, I was reading updates-

Talk about depressing. My heart goes out to the millions of people affected by this tragedy. It seems as if it literally could not get any worse. But, then, as if someone turned on a light in a pitch black room, I stumbled upon this…

“In a rare bit of good news, rescuers found two survivors Tuesday in the rubble left by the tsunami that hit…”
After four long days of being buried alive, two people are saved, pulled from the midst of debris. Crazy! Ninety-six hours of impending death. Truly, a miracle. And enough to give those rescue workers the most powerful tool they can possess – hope. Suddenly hours of exhausting, hard work, dealing with the cold, the wet, the depression, the hunger, the emotion…was all worth it. Because, if only for one saved life, the work was worth it.

That’s pretty powerful stuff. It amazing what the power of one person can accomplish. I take two things from this:

1) If everything I’ve gone through this year – the pain, hurt, rejection, humiliation, fear, anxiety, vulnerability, lack of trust, lostness, discouragment, stress, loneliness… is for the purpose of helping just ONE person who will go through a similar situation – it is worth it. Because hope is a powerful drug. (Lest you think that is easy for me to say, I type it biting my lip and with hesitancy) I have a cousin, who also went through a failed marraige. She reached out to me and she will never know how she comforted me. If even to remind me, “No Jen, you’re not crazy. I felt that too.”

2 Cor 1:3-4 “God comes alongside us when we go through hard times, and before you know it, he brings us alongside someone else who is going through hard times so that we can be there for that person just as God was there for us.”
2) You matter. Insert ridiculously cheesy quote- “in the world you may be one person, but to one person you may be the world.” So cheesy, but hey, it’s true.

One thought on “if only for one”