Pulling out of my neighborhood, I battled mid-afternoon traffic,  trying not to speed. Glancing down at the clock on the dash, my heart started to race. Tiny tears tried to make their escape from the corner of my eyes. I knew what I was about to face would not be easy.

I took a deep breath and did the only thing I could – I prayed. I pulled into the hospital parking, slung my turquoise camera bag over my shoulder and began to make the long walk to the NICU. Hospital sounds and smells inundated me the moment I walked through the doors. I walked faster, scared that I wouldn’t make it in time.

The curtain was pulled aside and I saw them for the first time. A precious couple, in their late twenties or early thirties. The mom, clad in a hospital gown was pale and looked like she passed the point of exhaustion hours before. Next to her was her husband, a rock of man, and somewhere in the folds of the blanket he held was a perfectly formed, tiny baby. She was 23 weeks old -so very small. The tubes which ran from her mouth to a loud machine in the room was keeping her lungs open – keeping her alive.

I was there to take photographs of mom and dad saying hello to their baby girl…and then saying goodbye. So I captured everything – her tiny fingers and toes, the fuzzy hair covering her head, her little chest rising and falling with each breath. She had a first name. She had a middle name. And she was beautiful.

The hands on the clock raced while I worked behind my camera, and before I knew it, it was time for them to say goodbye to their little girl after less than 24-hours of her presence. The tubes disappeared and I was able to capture this little family during the precious moments they had left together. I tried to give them privacy, but I heard as the mom whispered through tears, “Are you sure you don’t want to stay with us baby?”

I packed up my bag and they thanked me for those priceless photographs I had captured. I had never met these people before, but I knew I would never, ever forget them after this day. I have never experienced their same pain, but I do know what it feels like to hit rock bottom, as if your world has caved in. And so, one broken human being to another, I asked if I could pray for them. They agreed and I asked the Lord to cuddle this little baby in His arms.

And then I said goodbye to their little baby who had changed my life forever.

Because, the night before, I had started to believe a lie. It had been another long week and I was discouraged and tired. So I gave in. I started to believe that I would never do ministry again. That in my job, I didn’t really have the opportunity to help people. Through tears, I told my husband how much I missed making a difference in peoples lives. I believed the lie. I put ministry in the box labeled “church” and thought I couldn’t really make a difference unless I worked at a church again.

And yet, the very next day God proved me wrong. He rocked my world. I had tried to put the vast sum of His work in a box called “church”. And while the church is helping millions throughout the world, God is even bigger than that. He can accomplish His ministry to people in anyway He sees fit. And there are people hurting everywhere. There are so many people who need to be hugged or prayed with; people who need to be cared for.

God reminded me that as long as I’m walking with Him, He’ll use me, no matter where I am. 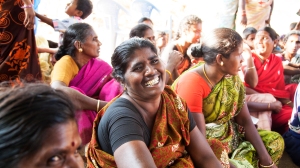 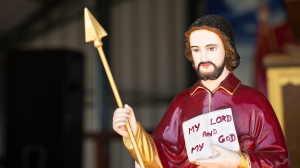 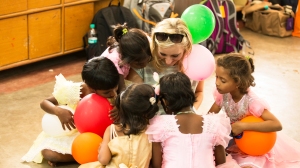