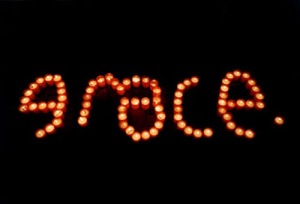 2 Corinthians 12:8-9 “Three times I pleaded with the Lord about this, that it should leave me. 9But he said to me,”My grace is sufficient for you,  for my power is made perfect in weakness.”

This past Sunday, I was able to read Paul’s blog. Okay, yes, I know that Paul lived in the first century AD and there were no such things as computers and blogs, or even iPhone’s (gasp!). But when I open up 2 Corinthians 12, I feel like I am opening up his personal old, torn up, dusty journal.

Paul struggled with something, and it was something extremely painful. He scribbles down that God gave him a “thorn in the flesh”. We have no idea what that “thorn” was because Paul keeps that detail to himself. Maybe Paul battled a physical sickness. Perhaps Paul’s wife left him after he became a Christian. But, we know that whether it was emotional or physical, it caused Paul deep pain.

And here we see Paul, on his knees, begging God to take this struggle away from him. How many times have you been there? I know I have; where God has allowed something in my life that was so painful and I pleaded with God for him to remove it. We’ve all been there.

“But he said to him.” In the Greek it literally translates as if God was saying,“Paul, this is my final word.” After three times of begging for relief from God, God simply tells Paul that enough is enough. Paul was going to have to endure through the struggle. And the crazy part is – He never gives Paul an explanation for WHY he has to struggle. Can you relate to this? Because I know I can.

I cannot begin to tell you how many times I have sat down with God in my mind to have the “Why” conversation. And I picture him saying various things:

“Jen, you had to go through the pain of divorce so that you would love and appreciate your future husband in a far greater way.”

“Jen, you had to endure this betrayal and divorce so you would have greater compassion for hurting people.”

“Jen, you had to go through this so we could be close.”

While all of these things are true, God didn’t ever actually tell me WHY I went through what I did. And chances are, He hasn’t told you why you lost your job; why your father died; why you miscarried your baby; why you battle depression.

BUT, while He doesn’t answer our “why” questions, He gives us something even better. “My grace is sufficient for you, for my power is made perfect in weakness.” It’s simple, but it’s true. His grace is enough. His kindness and love is enough to get us through the most severe trail. If He brought you to it, He’ll bring you through it. And don’t ever forget, that God always builds an audience every time you suffer and they are watching you. Suffer well.

In case I haven’t said it on my blog before, I want to be sure to say it now… despite every single tear that was shed, the struggle I faced this past year is the best thing that has ever happened to me. I would not take it back for an onslaught of reasons. God is so, so good.

This post came from Sunday’s message preached by @Jerry_Johnston

2 thoughts on “it is enough”